Spiritual Dangers of the 21st Century, by Fr. Joseph M. Esper, a powerful look at the way evil is attacking -- from societal issues like the microchip, monitoring, genetic manipulation, possible martial law, and New Age to personal attacks on the family by demons that in some cases may come through the popular culture or down through generations! A rare, candid, controversial look by a priest  who has also written on the anti-christ.  CLICK HERE

ADS DURING AMERICA'S GREAT SUPER BOWL SPECTACLE: HOW FAR WILL THEY GO WITH THE OCCULT AND LUST?

If you want to see how far and up front darkness has become in Western culture, you might want to peruse the commercials for the Super Bowl, although if catching spiritual fleas is a concern, you also may not.

We're no experts, because we don't really tune in very much, but one can catch enough of it in the play of daily news flow, and every year, they seem to get more "in your face." This year, they may be particularly nefarious.

Nefarious means evil. Let's call them what they are.

Mercedes Benz promises that this Super Bowl Sunday, "something sinister" is coming. Its teaser has a whirl of leaves entering a New Orleans restaurant as a song about the devil plays.

There is, as always, before all else, sex. This is nothing new. Half-dressed women "grace" many pitches. Last year a woman poising lewdly in a car was selling hamburgers (Hardees). If it's hard to see the connection between food and nudity, apparently they have discovered a subconscious glitch.

For half-dressed they are -- from Pepsi to Toyota to Bud.

Do yourself a favor: don't watch.

Basically, there are a bunch of women in underwear (there for our kids to see).

Oh, there are good ads. There are clever ones. There are ones that are harmless. And in the right vein, sports are okay. But if you want to see what Christ meant about the "world" (which of course He came to oppose), there is no better place than in television advertisements.

“Please allow me to introduce myself," says the song "Sympathy for the Devil" (in the Mercedes ad). "I'm a man of wealth and taste...”

Or a vivid demonstration of its spiral downward?

The materialism is breath-taking.

America is breath-taking. (So is a punch to the solar plexus.)

Some is just rap-weird (plus gay sex).

There has been a homosexual actor with a message in eye paint ("Feb 3 2013") promoting the game for CBS as a mockery of those biblical message that Tim Tebow wore in his eye paint (before the league disemboweled him).

"Go daddy!" they sing as a woman disrobes. In a second Mercedes ad, a model manages to turn washing a car into an obscenity. (Let's give CBS some credit; it did reject an ad from a hard-core pornographic website.)

"Something sinister is coming."

America is very ill. We all live on "Jersey Shores." (Get ready for more Hurricane Sandys.)

Or just: have another chicken wing.

Go to it, gladiators!

One of the tamer ads promotes superstition (if not sex, throw in a little bit of the occult -- or lots of it, if you are Mercedes).

As one apparently Christian columnist (oh, so uptight) wrote:

"As an armchair social scientist, this is intriguing. I’ve become a little too old not to connect the dots — to interrelate the conspiracy theories. To understand, when you look at it, how everything ads up.

"Here we have a song, which extols the triumphs of Satan, as seen by the Rolling Stones. It is used to sell Mercedes Benz vehicles in an advertising campaign, which is hinging its big unveil on the Super Bowl. In terms of advertising, the Super Bowl is the showcase of all things at the heart of consumerism. The Super Bowl is the most watched television event in the world. It is ultimately how we project Western culture to the billions of people watching the game around the globe.

"I wonder, however, if Mercedes Benz has a clue as to what the ultimate fallout might be of hammering 'Sympathy for the Devil' behind its iconic nameplate. Don’t forget, I’m not saying something about Mercedes Benz — Mercedes Benz is saying it. And it sounds like, 'Please allow me to introduce myself — I am Satan and I drive a Mercedes Benz...' Janis Joplin asked for the Lord to buy her a Mercedes Benz — as it turns out she should have asked the Devil."

If you're going to watch football, and we do on occasion, spend the ad time praying for everyone watching the game. It's a tremendous opportunity.

Who is prince of the power of the air?

And so we are where we are, and it is as it is.

Get with it, right?

Go with the flow.

Earth to your highness, Mercedes: You can relax now.

Something sinister already is here.

[Feedback: My name is Paul Mullin. I live in the Niagara region of Ontario, Canada. Recently I have noticed changes in the media that I find alarming. There are now very overt references to the occult in the mainstream. One I have noticed is Kelloggs Krave. Tag lines include the word sinful and temptation. Another is Kraft’s habanero shredded cheese. The commercial depicts Satan in a way as not to mock him but simply represent him. Satan in this depiction is not portrayed as weak or silly but as simply confused as to why he is not being recognized. Very sly. Skittles candy has a new package called 'darkside.' It has flavors that include forbidden fruit and dark berry. These examples jump out at me because of who is backing them. Kraft Canada, Kelloggs, and the Mars candy company, which owns Skittles, have always been very conservative and mainstream. Wholesome almost. It would seem to me they are testing the waters, seeing how much of the occult middle America can handle without being roused and that, I believe, is their final frontier. The middle-aged school teacher, the mechanic, the bank teller: if Kraft or Kelloggs can be so overt, then maybe it's just a myth, right? Maybe hell really is just a ‘state of mind,' and the devil is just a metaphysical interpretation. I wonder if there are other references I missed? National Geographic has a show called Hell on the Highway. Their tagline to promote upcoming episodes is ‘hell is coming...’ I know you receive a lot of mail, but I believe people should be aware of who they are giving their money to. Thanks for your time."] 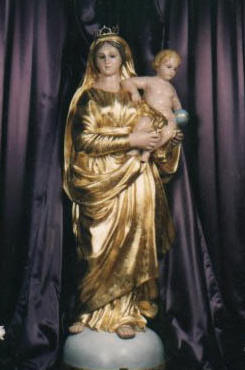