ODD FORMATIONS IN NATURE: WHEN THE LORD SPEAKS TO US IT IS OFTEN THROUGH 'SOMETHING WE HAVE NEVER SEEN BEFORE'

I find few things as spiritually edifying as simply spending time with nature -- God's first "temple." My hobby is kayaking, particularly the springs, lakes, and creeks of interior Florida. Recently, heading down one, I prayed to see something I had not seen before and immediately saw ten turtles at a single spot sunning themselves. I have seen countless turtles in my day, but never so many in one small spot. I saw more at a second spot. And then a third.

While seeing "something I had not seen before" might normally imply a sight that's extraordinary -- a bear or a panther, for example -- that wasn't my prayer. On this day -- with the sun shining, and yet with sprinkles of glistening rain at a few junctures -- you could almost touch Heaven. I had never seen the terrain quite glisten like that before either.

We take the "small" things and recognize God's precision in answering prayer.

What's "extraordinary" is whatever makes us feel close to Him.

One thank-you led to another and I kept seeing subtle things I had not seen before and finally prayed to see a good-sized alligator though I had never observed one in this particular stretch of clear spring run (they prefer dark creeks). Although it also had been long time since I'd watched one for any length of time completely out of the water (they're very skittish), suddenly, there it was, right in front of me: a six or seven-footer sunning himself on a fallen branch and remaining there far longer than I had seen before, for a good five to ten minutes, and at close range. During the past eight years I have seen about a thousand gators in the wild (by my last calculation a couple of years back), but there was just something very special about viewing this "unexpected" one so quickly after thanksgiving and prayer.

In their own way -- and, yes, often at a proper distance -- all God's creatures are things we have never seen before. (Above at right, a different gator more than a year ago; as skittish as deer, they attack only when a person does something foolish or provokes them, especially by trying to capture their young).

How often do we contemplate and thank God for the beauty He designed around us? While much of nature has been degraded (due to the false notion, in some Christian circles, that when God said to "subdue" the earth, He meant to exploit it), there remains enough to remind us that notions of it all being a product of evolutionary chance are absurd. John Paul II admonished that we are not as concerned as we should be about preserving it. While we should never see nature as a conglomeration of "gods" (a temple, yes, but not a goddess), "it is also necessary to reject the opposite position, which aims at total technical dominion over nature, because the natural environment is more than raw material to be manipulated at our pleasure," said Pope Benedict XVI.

In a recent book, a former satanist (now a devout Catholic) made an intriguing point: that God's Creation is a great defense against evil. "Take a walk by the water or through some forests or fields," writes Deborah Lipsky in her remarkable book, A Message of Hope. "Observe the wildlife be it squirrels, birds, butterflies, or flowers. See and appreciate the beauty of nature and recognize the perfection of an awesome God Who orchestrated such a beautiful Creation. Focusing on appreciation crowds out any opportunity for demons to whisper a negative thought into your head. Satan can't create, only destroy, so in nature we focus on Creation and our Creator which proves that Satan is no match for our mighty God. Appreciating the natural world also leaves us in amazement." Demons deplete our energy, she says. Nature builds us up (which is perhaps why Satan seeks to destroy it).

Sometimes, you wonder at how the Lord seems to leave direct signs in nature -- particularly, it seems, trees and wood. There has been a little flurry of related news articles recently, one about an image that looks like a Cross in California [above, left] and another in Utah, quite like the Madonna and Infant in the stump of a tree [right]. "A groundskeeper whose brother died a few weeks ago in a car accident is finding comfort in a small but distinct cross discovered in a tree trunk at a Lafayette cemetery," said the Contra Costa Time about the Cross. "'Since my brother passed away, I've been looking for signs, waiting for him to come to me in my dreams, tell me goodbye,' said Juan Ochoa, 45, who works at Queen of Heaven Cemetery, where tree trimmers on Tuesday stumbled upon the religious symbol. The discovery, he says, is helping ease his pain. Workers removing the fallen California pine stopped cutting when they found the cross image in a section of the tree. No other portions of the tree contained similar markings, Ochoa said."

Or there is the New Mexico man who believes he sees the Blessed Mother in firewood [above left]. 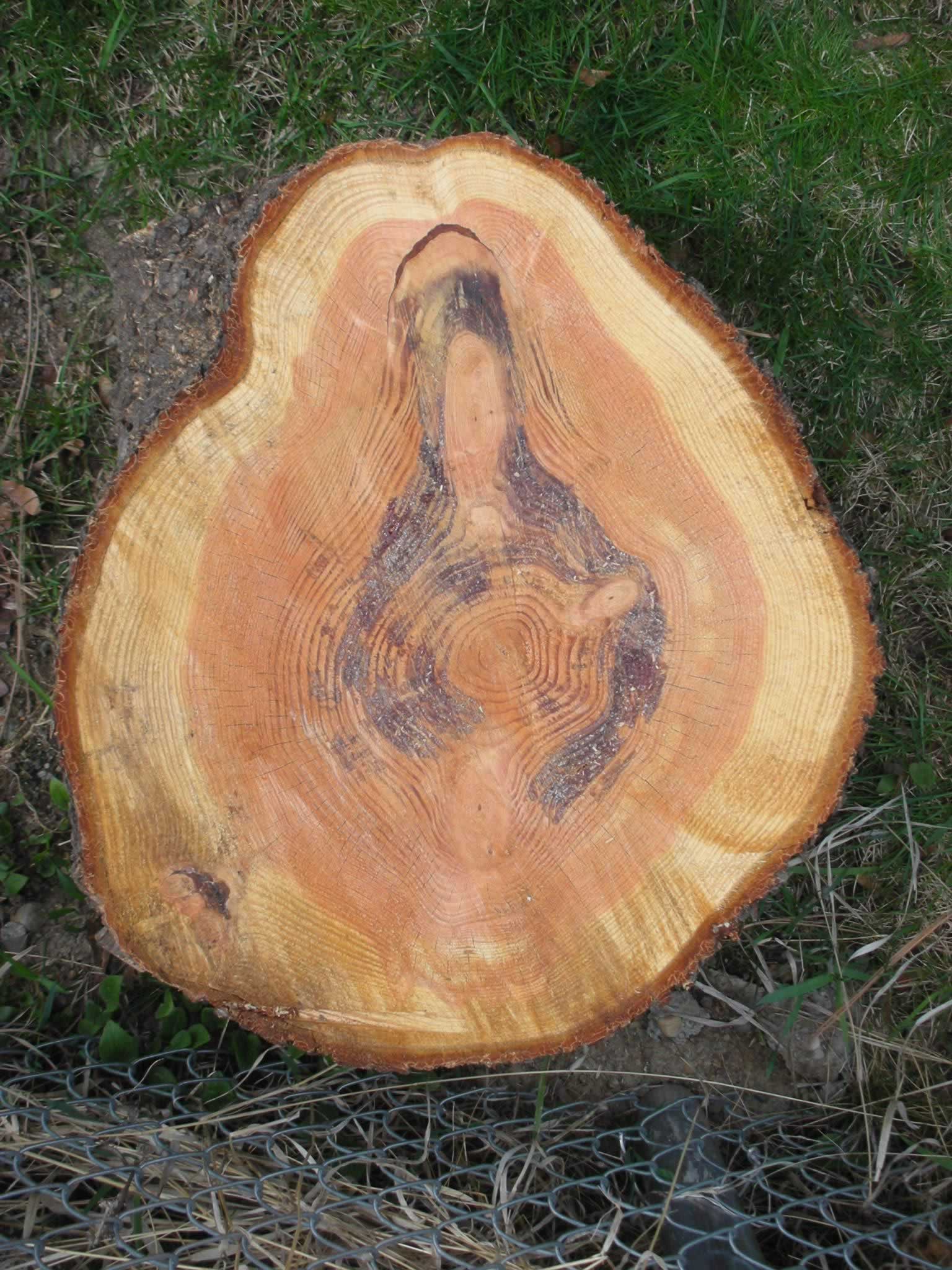 Back in 2009, Peggy Miller from Spokane, Washington, sent us a photo of what also could be taken as the Blessed Mother (enlarged, near her heart, there is a face one could also take as that of Jesus) from a log. Look how similar it is to the recent one [again, above right]. Is this something that happens with the way sap runs in certain trees and if so, does it make it any less miraculous (as a way of contemplation)?

God certainly speaks through nature; is He trying to say something in particular about our trees?

God speaks loudest in ways that are so simple -- in the symmetry and sculpted texture we can never imitate despite the best efforts of the artist's brush.

[Peggy had said, "There were two very tall pine trees growing in my front yard -- on either side of the walkway leading to the front porch.  I have lived here in this house for ten years.  It was built in 1911. The trees were very much a part of the charm of the old cottage house. But, because of the heavy (record) snow fall this past winter, one of the trees lost an enormous amount of branches. It was very sad because I knew the tree may have to come down. The middle of the tree had also been hit several times by huge lightening bolts and once caught on fire. The tree is called a Douglas fir and was about 100-feet tall. On the other side of the walkway was a ponderosa pine and it seemed alright but decided to take that one down too, for symmetrical reasons.

"After both trees were chopped down and cut into 14-inch logs, some friends came over to take the logs to split and use for firewood. As the last dozen or so logs from the fir tree were left on the lawn and ready to be carted off to the truck, I noticed this one log with a particular image in it.   It really amazed me and needless to say, I kept that log for a treasure. Hope you see in the image what my family and friends and I see. Also, if the log is turned 'upside-down' -- the other way -- there seems to be another image. I counted the rings in the logs from each tree and both trees' logs had 98 rings: same age as the house. The image was at the bottom of the trunk of the 100-foot tree -- made  long before I was born! It blessed me and I hope it blesses you too. I am the grateful recipient of God's Love! We are never alone!"]