What's in a cloud?

Is it naught but water vapor?

If you listen to scientists, of course, the answer is a thunderous yes. They would roll their eyes at the thought that a cloud could figure into something supernatural.

Angels are seen on clouds, as is the Blessed Mother.

"I set My bow in the cloud, and it shall be for a sign of a covenant between Me and the earth," God said in the very first book of the Bible (Genesis 9:13). "The Lord was going before them in a pillar of cloud by day," says Exodus 13:21. It's how He led the Israelites; when Moses went up the mountain, a cloud covered it.

Do images also appear in clouds, or do clouds form pictures as another way in which we are touched by the Lord?

One could certainly argue that there are so many clouds that at least a few will resemble images, by sheer force of "chance." But the number reported defy "coincidence." Before September 11, clouds forming large angels were seen in New York State, while they formed two towers in the sky above San Francisco on the night of September 10 -- resembling the World Trade Center. Eerie clouds were reported in Texas days before the recent deluge.

And so perhaps we should take a second look when people say they took a photo such as the one just below. 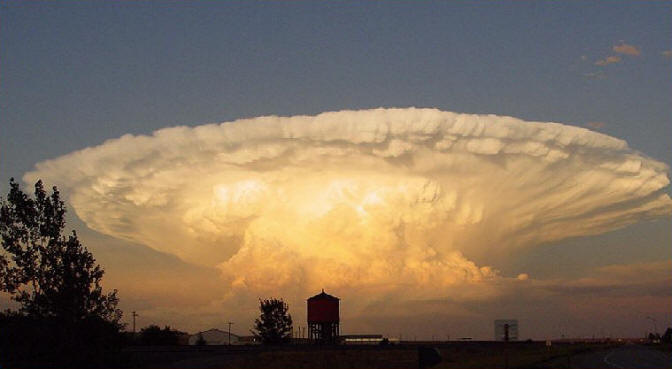 Does the Lord speak in clouds today as in biblical times? Might He use such as symbols?

It's a cloud over the town of Lusk in eastern Wyoming of which we speak, and we openly wondered if it was another digital hoax (for which the internet is famous).

"The 'cloud over Wyoming' was indeed real," says Don Lefevre. "My sons and I watched it develop over about 30-45 minutes as we were driving toward Lusk on the evening of August 19. We took multiple photos of it, and my son intends to enter one in the next South Dakota Fair."

"I live in Lusk Wyoming where that cloud appeared and I can assure you that it was an eerie but awesome site to see," wrote another witness, Kristi Hart. "I have several pictures of that cloud as it was forming and as it dissipated it. I have never seen anything quite like it.  Rest assured that cloud was real."

"As I was looking at the picture today 'Cloud over Wyoming,' my 10-year-old son walked up behind me and asked me if it was a volcano exploding," wrote a woman named Lisa from Monroe, North Carolina. "I told him no and he asked me what it was. I told him it was a cloud and he asked where it was taken. I told him Wyoming. He then said, 'It looks like a huge mushroom.' I agreed. Then he said, 'I wonder if it’s a message from God.' I asked him what kind of message it would be. He said he didn’t know. Out of the mouth of babes. For those with eyes to see?"

We are not prone to write such things off as quickly as some, believing as Einstein said that God does not play with dice. This said, we can get to the crux of it: the cloud obviously and strikingly looked like a nuclear mushroom cloud.

Is this simply because clouds can also top off like a nuclear explosion, given atmospheric pressures, or is it a prefigurement? Is it a warning of what can occur -- through terrorism or a circumstance with a nation such as Iran (or for that matter Pakistan, which is a major nuclear power and is shifting leadership)?

Why an agricultural area? Why Wyoming? 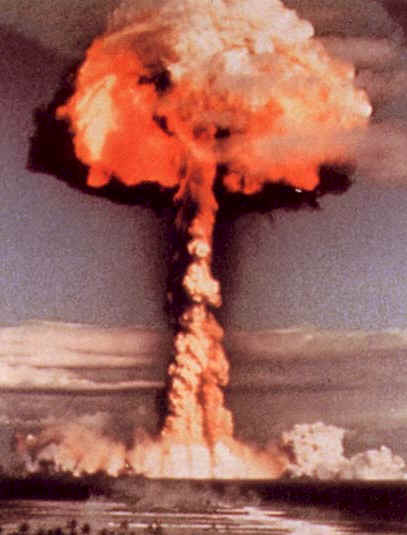 We recall the famous cloud over the French nuclear test site on the Pacific island of Mururoa [left] -- in which can be clearly seen in the stem Christ on the Cross and above to the left the Blessed Mother. The photo appeared in Newsweek.

Many things are sent to us not so much as set prophecies but as warnings of what could happen if the circumstances of man continues in the way they were at that particular moment. Your discernment is as good as ours.

"On the lower left hand side of this 'mushroom cloud is the picture of the Blessed Mother gazing down at the Baby Jesus in her arms," asserted Lynn Manuszak of the Wyoming cloud. "I am sure you will find more pictures in that cloud if you look long enough. Very interesting nonetheless."

Lusk is a town of 1,800 that once prospered during an oil strike and then as a stagecoach stop during a gold rush and was known for a famous murder that involved a brothel. More than that is not yet apparent.

Others wondered about the eclipse of the moon this week, which turned red (as in "blood red," and as in Joel 2:31: "The sun will be turned into darkness and the moon into blood before the great and awesome day of the Lord comes..).

A sign, or simply a regular occurrence? It does repeat. The last time was in 2000.

"The full moon at five a.m. in St. Louis was gyrating," insisted Charles Hart. "I watched it gyrate and it reminded me of the Host. It reminded me of a beating heart and served to remind me of the Living Presence of God in the Host and in the entire world. As I watched it, a cloud moved across it and a small black cross appeared on its surface."

We see what the Spirit wants us to see. There are symbols all around us. Mainly, they are incidents in our lives, or in the world.

In Greece, there is fire -- ironically, where the Olympic torch is lit at an old pagan altar.

"The fire that rages on near my mom's town, Kamari, is near the ancient site of Olympia," wrote Domenic Marando at the height of the blaze, imploring prayer. "Some of you may know this location.  It is the original location of the Olympic games and is still home to the  Olympic torch.  Fire threatens Olympia as everyone in the surrounding towns has been asked to evacuate immediately! As for my mom's town, the fire is about 20-30 kilometers away. There is a river that the  fire must jump in order to get to Kamari, and to date there are no reports that it has done so." 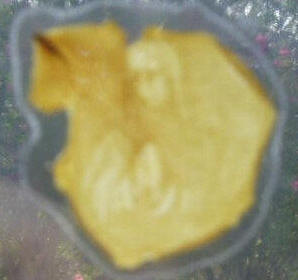 Fortunately, that has settled down. Are there other signs? Are rose petals still displaying holy images in the Philippines -- or is it, as some assert, sleight-of-hand (perhaps the pressing of a petal against a medal, as at right)? Is there truly a bleeding Host in Uganda, or is the devil up to tricks? Is there a bleeding statue, as we speak, in Malaysia -- and if so, why there?

If you saw the number of such reports we receive, you would pause before discounting them all; you might also ask such questions.