Flurry Of Predictions Underscores Need For Both Skepticism and Discernment

Usually it happens closer to Easter but this year it's New Year's that has brought in a flood of dire prophetic warnings.

First there are numbers.

That's a Tuesday in June and in Holland (the poor, woeful Netherlands) couples with what seems like a disjointed sense of the ironic are choosing June 6 for their weddings.

Is there really anything to such numbers?

Then there are the disasters. The year jumped to a start with fires in Oklahoma, floods in California, an unusual cold blast in Europe, and tornadoes in the U.S. -- along with a horribly tragic mining disaster that at first seemed like a miracle.

We are in unusual times. No doubt about that. How do we discern the true prophetic pulse?

For many Catholics, there has been a sudden prophetic explosion: the first days of 2006 saw mailboxes fill with e-mails claiming arcane messages with specific dates for long-anticipated events known to those who follow one popular apparition site as the "warning" and the "miracle." Supposedly, goes another rumor, the seers are meeting or planning to meet in an extraordinary way. We'll endeavor to find out if there is any truth to that.

Each year, speculation rises on when events may converge to produce those prophesied events, and the focus is usually Easter time because many of those who follow the prophecies have deducted that the miracle will occur in April (on the feast of a martyr who had a connection to the Eucharist). We respect those who follow such events and as always urge discernment. 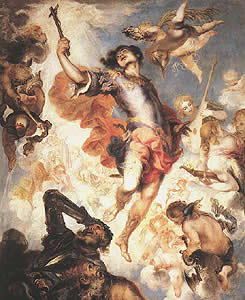 The current rage in the blogs is about "an alleged mystic name Nora Arthurs. The story is she has been asked to go to Garabandal [in Spain] on December 28, to make an announcement on January 1 that the warning, the illumination of conscience, will take place on January 8 at 3 p.m., the hour of Divine Mercy. It seems as though the woman has been getting messages for a very long time. Nora has revealed that the date of the warning will be on the feast of the Epiphany. From this they have pinpointed the date of the 'miracle' as April 13, the feast of St. Hermengild [right], a Eucharistic martyr."

We certainly don't despise prophecy here, but we have not yet been able to confirm that such a person even exists and are very skeptical of prophecies that involve specific dates. Shortly, on January 8, we'll know.

"A Great Shaking will be upon you, if the course of events continues without turning back the tide of humanity to the Divine Plan of God the Father," says another message from a man who had a credible near-death experience.

"Very, very soon you will see a 5.8-magnitude earthquake very early in the morning strike in the Seattle area," claimed another, if we really want specifics. "In approximately three hours time there will be another, but much stronger quake rock areas further north near the Everett and/or Vancouver area. This will measure 7.8 on your Richter scales, but in the same amount of time another will be felt further west and south, measuring a nearly immeasurable 12.8, and great destruction everywhere [will occur], but these are to be only warnings of the one, most powerful to follow in approximately five to six hours."

Adds a footnote: "I see a view of downtown Seattle from the north looking south, and suddenly the whole city is upturned as if being 'plowed' under, similar to how a tractor turns the soil while plowing. I see a picture of the Bellingham area. These massive quakes seem to form a 'perfect' triangle over this area where so much evil lies hidden and waiting. I am shown a picture of the Columbia River Gorge at Vantage, Washington. And the I-90 Bridge. At the time of this last earthquake, all remaining bridges will be destroyed. It has been no small secret that for some time the City of Seattle government has hidden the true state of the volcanoes and faults of this area from the people. Also the priests and pastors who deny prophetic warning, all for the sake of 'better collections.' Father Stefano Gobbi, while at St. James Cathedral in downtown Seattle was given a message specifically for that Church and Diocese and pastor, warning that the perverse acts of homosexuality are what calls down God’s wrath and destruction on such an area."

And so it goes on the internet.

We have been more prone of late to weigh the experiences reported by common folk, as opposed to only reputed "seers." From them come countless cases of signs in the heavens and in their own personal lives.

We are in an exciting time that is perilous but also filled with grace.

Many events loom on the horizon, and it is God Who knows the specifics. Noted a woman who has been having experiences at night: "There was, in my dream, a statue of Our Lady and she was crying. She was mourning the casualties of this war. I took that to mean the ones who would be spiritually lost through their own choice. After I woke up close to four a.m., as usual I was wide awake. I felt compelled to pray the Our Father slowly. I really felt at peace that what God was getting ready to do, though it will mean a confrontation and war with evil, in the end will deliver us from this evil age."

"With the information that He seems to be downloading to many people of various types of faiths and walks of life, there can be no doubt, that He is getting our attention to be prepared!" notes Dave Ross of Farmington Hill, Michigan. "Keep looking to the sky, because I keep getting feelings on this from Him to watch!" Indeed, watch; watch and discern and be careful not to go overboard.

No Surprise As Prophecy Falls Through

Obviously, predictions that something was going to happen on January 8 (specifically, at 3 p.m.) have not panned out, to perhaps no real surprise, certainly not here. Such specific predictions rarely do pan out. As we warned last week, we must be careful with prophecies that are overly specific, with dates or any detail. In this case, the prediction came from an alleged seer who according to one website was associated on at least one occasion with William Kamm, an Australian "seer" who is currently in prison for sexual abuse. Meanwhile, when prophecies are wrong, yes, it can be that God changed His Mind, but in cases of such specificity, it is more likely because the prophecy was presumptuous and came from the wrong source to begin with. Our prayers must be for our own discernment and for those who are self-deceived.