In A Flurry of 'Signs', Some Wonder If A Manifestation Of Jesus Is Just Around The Corner

It may sound like a strange question, and we really don't think it's the case. But let's ask the question: Is the Blessed Mother receding?

It's a strange question because around the world, especially in the past several weeks, have been headlines about statues of the Blessed Mother weeping. And as always, there are apparitions. There are alleged "locutions." As we reported just last week, there is a proliferation of dreams.

Yet in the midst of all that is the vague notion that Mary may be stepping back, at least a bit, from the more dominant role she played during the 1980s and 1990s -- when claims of apparitions were far more robust and when huge apparition sites like Medjugorje were more in the public eye (at least in North America; in some nations, the site is as popular as ever).

It was at Medjugorje that a visionary said she was told that when this particular apparition site, the most intensely attended since Fatima, was widely disclaimed that events would begin to happen, and it is here that a second seer reportedly commented a month ago that Mary seemed preoccupied during a recent apparition because she is tending to part of her "plan" (not indicating what that "plan" might be).

Is there something in the wind? Might the Blessed Mother be "preoccupied"? Are manifestations now more directly involving Jesus?

We can note that while the statues and images of the Blessed Mother remain in the news and probably always will, images of Christ seem to be gaining prominence. Is this a telling sign? Are we at a turning point? Might He be joining her in open manifestation?

First, a comment on Mary's statues. In Sacramento she is said to be exuding a blood-like fluid. The diocese says at this point there is no plan to investigate but the statue has gained international headlines. Startling this has been for those who claim everything is fine and that we are not at a critical juncture of history.

If everything is going so swimmingly, if all is well, one wonders why the Blessed Mother has been manifesting in such a way. "A statue weeping blood -- kind of obviously, she's not crying for joy," notes Dr. Sandra Zimdars-Swarz, an expert on Marian apparitions.

"She cries for everybody's sin," comments Van Li, a visitor to the statue who cuts right to the heart of the matter at a time when others try to cover over the nature of our time, granting false assurances.

When Jesus manifests, His statues also exude tears and He too has been known to exude blood. A statue of Christ Crucified has been shedding blood in Cali, Colombia, and His Face was recently claimed on a car in a lot in Laredo, Texas. Can we put stock in that? "God is speaking to his people, especially through private revelation which is so politically incorrect among the priests," a Texas priest wrote us.

Many are being touched. Many more will -- if they are open to it, and in the authentic cases.

But are the manifestations more frequent than previous years?

We're not sure, but we give air to prophecy here, and we have especially noted an anonymous but closely watched and documented one from 1990, an alleged locution from Christ and an angel.

That "message," which foresaw regional disasters and alluded to September 11 many years before the actual event, gives us food for thought because it also foresaw a major manifestation of Jesus (as did the late great seer Maria Esperanza).

Is this starting to happen?

Again, there is no way of knowing if there is a link, but we must note that reports of mysterious rumblings have been coming from around the world of late -- right there in news reports -- along with countless "signs" in the sky.

"We had a spectacular comet land in Western Australia yesterday up north from Perth, where as I'm sure you are aware, a statue of Our Lady of Lourdes has been shedding tears for almost a year now," writes Barry Mc Innes this past weekend from Down Under -- where the spiritual warfare is hot and heavy. 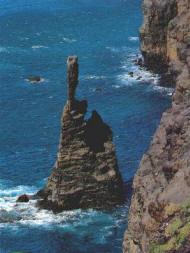 In the Canary Islands -- where many fear collapse of a volcano that could cause an enormous tsunami -- a tropical storm recently tumbled a formation in rock long known as "The Finger of God" [left].

That's on Gran Canaria,  which is one of the world's foremost homosexual playgrounds -- like New Orleans, where "Decadence Weekend" was canceled due to 'Katrina,' and Key West, where the annual debauchery festival called "Fantasy Fest" also fell  victim to a hurricane, in that case 'Wilma.'

Signs in the sky? Jesus?

"On November 7th, at about 4:20 p.m., my daughter pulled into the parking lot at K-Mart," writes Pam Urdiales of Copley, Ohio, in an e-mail typical of hundreds we have received. "She was thinking the sun looked particularly beautiful. It was a huge white gauzy globe, low in the sky, obscured by clouds, but beaming bright. She got out of her car to see it better, and took out her cell phone, which has a camera on it, to take a picture of it. When she held her phone up and pointed it at the sun, there suddenly appeared in the center of the white, a bright, pink, small ball. She began to videotape it (her phone also has a video recorder). As she watched, the small ball bounced around, or danced, and pulsated, and the bright pink color spread around the white area of the sun. She described it as looking like a little ball in a box, bouncing around in it. You can hear her voice on the video as she is watching, saying, 'Am I really seeing this?' We put the video on our computer, and watched it over and over.  Soon, we were able to see a likeness of Jesus' Face above the sun similar to the face on the Shroud of Turin." 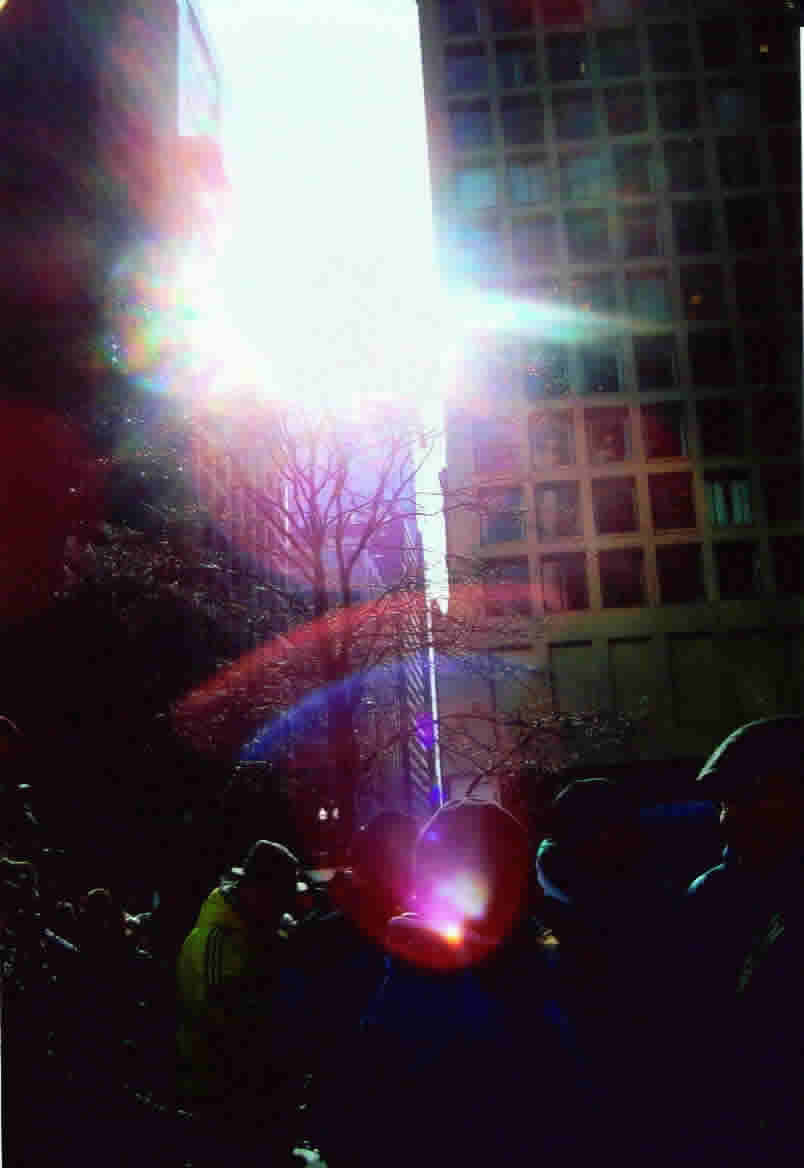 In Chicago, meanwhile, the "miracle of the sun" was seen to shine a ray in Daley Center Plaza [left] on a Nativity Scene, also recently. We get the "word" here that soon clouds will obscure the sun.

What of "fire" from the sky? Might this be a meteor shower -- one that frightens us but does not cause catastrophic destruction?

Signs in the sky have been important throughout history-- the Star of Bethlehem as one example -- and there is currently interest in an unexpected burst of meteors on October 5 that some fear may betray the presence of a thus far unknown comet.

Such astronomical phenomena are known to history and recently we saw how Hale-Bopp appeared unexpectedly and nearly out of nowhere, spotted by an amateur astronomer. Are we in store for another surprise?

Whatever the case, prophecies concerning events on earth continue to unfold and demand that we revisit an especially astute one given to a Catholic evangelist named Ralph Martin on Pentecost Monday during a Charismatic Conference at St. Peter's Basilica in 1975 -- at the height of the charismatic renewal. This prophecy too seems to have materialized.

"Because I love you I want to show you what I am doing in the world today," Christ allegedly said in locution (or as charismatic have it, as a "word of knowledge"). "I want to prepare you for what is to come. Days of darkness are coming on the world, days of tribulation… Buildings that are now standing will not be standing. Supports that are there for my people will not be there. I want you to be prepared, My people, to know only me and to cleave to me and to have me in a way deeper than ever before. I will lead you into the desert…. I will strip you of everything that you are depending on now, so you depend just on me. A time of darkness is coming on the world, but a time of glory is coming for my church, a time of glory is coming for My people. I will pour out on you all the gifts of My Spirit. I will prepare you for spiritual combat; I will prepare you for a time of evangelism that the world has never seen. And when you have nothing but Me, you will have everything: land, fields, homes and brothers and sisters and love and joy and peace more than ever before. Be ready, my people, I want to prepare you…"

Remember, this prophecy ("buildings that are now standing will not be standing") was also before September 11. Others have likewise foreseen a breakdown of our complexity and a return to a more peasant-like style of existence. We know that many of the institutions on which we depend have experienced a meltdown since and beginning around 1975.

But back to the Blessed Mother. Is she receding?

Another "word" here: She may seem a bit quiet, but expect her to remain in the fore -- pointing to her Son.

"I will come not as a man of flesh, but like My mother, who already nurses Me and holds Me in her arms, as a light and power," Jesus said in the alleged 1990 locution. "I will manifest Myself in a series of supernatural events similar to the apparitions but much more powerful."