Intriguing are the indications (emphasize indications) that major events will occur once John Paul II is gone. Many have long speculated such a consequence; it's only logical to think of major Church happenings when this extraordinary pontiff passes to the other side.

But the predictions go beyond happenings in the Church and come not just from normal speculation but also from the realm of credible prophetic mysticism.

We have mentioned how St. Faustina Kowalska was told that a "spark" from Poland would set the way for Christ's Second Coming. Of course, Poland is the birthplace of John Paul II -- leading many to discern that she was referring to him and his pontificate. Indeed, an argument can be made that he is one of the top five pontiffs in history -- right up there with giants like Gregory the Great (whose own tenure occurred during a great chastisement that was befalling the Roman Empire).

The fact that the Pope has dedicated himself so totally to the Blessed Mother, has issued historic encyclicals, created a new Catechism, played a crucial role in world affairs, revealed the Third Secret of Fatima, made 100 trips abroad, canonized a record number of saints, and has added mysteries to the Rosary (a few of his many accomplishments) argues for his crucial importance not just now but into the future.

Totus tuus, total dedication to the Blessed Mother, is John Paul II's motto, and like Gregory, his pontificate does portend to have great future significance. Many are the current-day visionaries and locutionists who claim his death will set major trends in motion -- in the words of one, a "great storm." Others have gone so far as to state a conviction that he will be the last Pope.

That seems a bit dramatic, but major events do appear on the horizon and John Paul does seem to have dedicated his pontificate to preparing the Church (100 trips!) for something. He is in tune with modern prophecy -- reading messages from certain sites of apparition, especially Medjugorje, where the Blessed Mother has mentioned him a number of times. In one locution to a local woman named Jelena Vasilj, the Virgin allegedly said: "In my messages, I recommend to everyone, and to the Holy Father in particular, to spread the message which I have received from my Son here at Medjugorje. I wish to entrust to the Pope the word with which I came here: MIR [peace], which he must spread everywhere. Here is a message which is especially for him: That he bring together the Christian people through his word and his preaching; that he spread, particularly among the young people, the messages which he has received from the Father in his prayer, when God inspires him."

That message was in 1983, and the Pope's actions since that time -- especially in his traveling and establishment of World Youth Day -- point strikingly to obeying such a directive.

Is he, as the Vatican -- and seers -- say, the Pope of the Fatima secret? Will his passing therefore cause a religious, sociological, and political sea change?

It is our concern that an evil personage (or the spirit behind such a person) is waiting for the Pope to pass before exerting strong influence on the world stage. After his death, there will be a crystallization of events. We believe that he has willed himself to remain with us because he realizes his importance in preparing us for the challenges that are ahead -- inside and outside of the Church.

Most recently, we see in a book of updated interviews Venezuelan seer Maria Esperanza's view that there will be a major manifestation of Christ in association with the death of "an innocent person whom He loves a lot, an innocent person."

Is she referring to the Pope?

In the same interview Maria asserts that the Lord Himself told John Paul to include the new Rosary mysteries and when asked about whether John Paul was in danger, Esperanza commented: "He is in danger but he has great assistance. Our Lady is always with him, protecting him. She loves him very much -- very much."

That makes it sound very much like it's his passing that will ignite huge spiritual and temporal events.

We praise God that he has been with us so long. It's a miracle. Even with Parkinson's, he astonishes the press by his endurance. That's because (see below) he has huge forces of protection.

How important is the Pope?

At Medjugorje, Mary put it succinctly, saying: "He is your father, my angels." 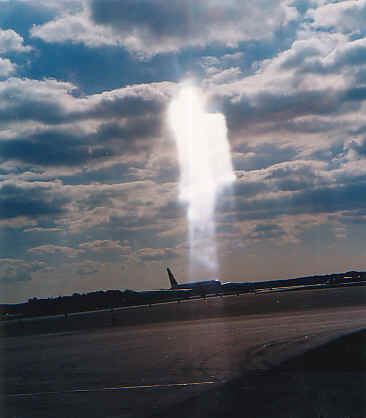 When the Pope arrived at Baltimore-Washington airport in 1995, this peculiar formation of light appeared in a photo of his plane.

Speculation On Coming Of Christ, Long A Prophetic Theme, Is Reaching Crescendo

In the years since the French Revolution, there have been numerous predictions of the Second Coming, or at least some kind of major manifestation of Christ. Such speculation increased with an apparition of the Blessed Mother at LaSalette, France, in 1846, then in the wake of the famous Fatima secrets, and then again in 1948 with the establishment of Israel -- which many see as fulfilling a major requirement for apocalyptic events.

During the past twenty years, that momentum has reached a crescendo, in large part because of the occurrence of another major apparition, Medjugorje in Bosnia-Hercegovina, where, like LaSalette and Fatima, secret prophecies allegedly have been granted.

The Medjugorje visionaries have never said that the secrets contain a prediction of the Second Coming, and in fact one, Vicka Ivankovic Mijatovic, says that while containing predictions of very serious coming events, the nine confidential prophecies she has been given do not specifically address the anti-christ, the Second Coming, or the end of the world (which the Catechism teaches will follow the Final Coming).

But elsewhere there have been a flurry of just such claims, including those of St. Faustina Kowalska -- who in 1935 wrote that she had heard Christ tell her, "'You will prepare the world for My final coming'" and in 1936 allegedly heard the Blessed Mother say, "Oh, how pleasing to God is the soul that follows faithfully the inspirations of His grace! I gave the Savior to the world; as for you, you have to speak to the world about His great mercy and prepare the world for the Second Coming of Him Who will come, not as a merciful Savior, but as a just Judge."

In 1938 Faustina added a message from Jesus, writing in her diary that "as I was praying for Poland, I heard the words: 'I bear a special love for Poland, and if she will be obedient to My will, I will exalt her in might and holiness. From her will come forth the spark that will prepare the world for My final coming.'"

The Coming of Jesus also has been mentioned at Church-approved sites in Kibeho, Rwanda; Betania, Venezuela; and San Nicolas, Argentina, as well as a flurry of revelations that have never been granted Church sanction. The same is true in general Christian circles, where evangelicals, Pentecostals, Baptists, and nondenominationalists have loudly declared their belief that Christ is ready to return -- citing developments in Israel, which they watch like an augury.

The term "second coming" is used in what we have reported as the"1990 prophecy," an anonymous revelation that thus far has shown striking accuracy. Said this reputed revelation: "I will come not as a man of flesh, but like My mother, who already nurses Me and holds Me in her arms, as a light and power. I will manifest Myself in a series of supernatural events similar to the apparitions but much more powerful. In other words, My second coming will be different than My first, and like My first, it will be spectacular to many but also unknown initially to many, or disbelieved. Yet truly I tell you, the arrogance of the world will have been broken, and so many more than normal will believe. I will come in towering light. My mother held me in her arms at Medjugorje, as an infant. I will come as she has come, in light."

Perhaps never before in history -- at least not since the Middle Ages -- has there been such a surge in prophecy. In medieval times the prophecy ended up more a portent of chastisement than final events, coming in the midst of bubonic plague, which devastated a third of Europe.

Is the same true now? Are the prophecies more a foretelling of chastisement (which is mentioned at Medjugorje) -- or of something more cosmic?

The question arises again because of a recent interview with the seer from Betania, Maria Esperanza, who says that at the least the world should prepare for a major manifestation. She has referred to a coming period that will be a "new dawn of Jesus" and has said that "His coming is near." In more recent interviews she has expended on this theme and describes visions in which she has seen Jesus appear in many places from day to day in a way that brings to mind the way Jesus appeared during the forty days following the Resurrection. Perhaps significantly, "Betania" means "Bethany."

In her visions, the Venezuelan seer describes Christ as appearing to many individuals in what seem like manifestations.

"It will be very different than what people think," she says in The Bridge to Heaven."He’s going to come in silence. People will realize He is among us little by little. His first presentation will be like this, because in those days an innocent person whom He loves a lot will die, an innocent person. This will shock the world, will move the world. Many people will believe. He will disappear for some days and appear again. He will multiply Himself, to assist everyone, in their homes, because this will be a definite thing. He will come and knock on every door. And then people will realize it is truly Him."

The question arises as to whether Esperanza -- whose site of apparitions was formally approved by the local bishop in 1987 -- is, like St. Faustina, making reference to the Pope when she mentions "a person whom He loves a lot." Many have taken the "spark" mentioned by Faustina as coming from Poland to be John Paul II -- who never has publicly foreseen the Second Coming himself but who has referred to our times as apocalyptic in the sense of the Church versus the anti-Church and good versus evil.

Esperanza does not describe it as a "final coming," but makes clear that major events and transformations are on the way and that the appearance of Jesus, however it is termed, will be preceded by major events.

Second Coming? Final Coming? A manifestation? Clearly, however we term it, and however it does or does not meet our preconceptions, something major, something historic, and something unusual, is ready to occur, in all likelihood within the lifetimes of many reading this.