Beatified Woman Showed The Challenge Of Discerning Visions About The Future

t is a fascinating case: do we accept the revelation of a woman once she is beatified? Does that legitimize all that she foresaw, which in this case was dramatic?

The Church has stated with past circumstances that a person's veneration, beatification, and even canonization does not mean that the Church has "approved" or accepted as authentic every prophetic utterance from that holy personage. If it did, there would be contradictions between various such revelations. In fact, the Church has often taken pains to distance itself from the mysticism of those who have been venerated.

But obviously when such a devotee is recognized (as unusually sanctified, which is what the labels mean), one's interest in what that person perceived is heightened -- and such has been the case with Blessed Anna-Maria Taigi of Italy, a mystic who died in 1837.

"I pieced together some of the incredible facts about Blessed Anna-Maria Taigi and her phenomenal supernatural gifts that [author] Colleen Hammond related in the brief summary below," notes a viewer.

"Anna Maria Taigi is one of the great mystics of the last century. Popes and cardinals have referred to this holy married woman as one of the greatest saints of all time. She was praised by Pope Benedict XV in her beatification on May 20, 1920, as being an exemplary wife and mother amid poor and trying circumstances. Her daily attendance at Mass, her total surrender to God, her readiness to help anyone in need, and her being an active member of the Third Order of the Most Holy Trinity were, at the same time, the sources and the fruits of her intense spiritual life.

"She entered the Third Order of the Most Holy Trinity on December 26, 1808. God enriched her with many supernatural gifts. The most unusual of these was the apparition of a luminous globe like a miniature sun which shone before her eyes and in which, for forty-seven years, she could see present or future events anywhere in the world as well as the state of grace of individuals, living or dead.

"She was frequently in ecstasy, worked miracles of healing, read hearts, and foretold deaths. She foretold the first two world wars of this century. Well before Pius IX became Pope she strongly encouraged him to lead an exemplary holy life because one day he would become Pope. She once foretold of 'two large silver tubes that would strike two large buildings in the New World' [9/11?]. 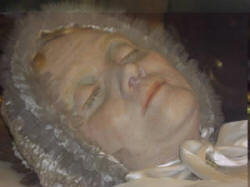 "When investigators were pursuing her cause to be declared 'Blessed,' they asked her children if their mother would ever levitate, bi-locate, or have ecstasies. But because her children had a limited education, they answered no to these questions; they didn’t know what these terms meant.

"And when it dawned on some of the investigators that this might be the case, they posed their questions differently, such as: 'Did your mother ever float in the air.'

"'O yes,' they answered, and sometimes when she was high up towards the rafters, we would have to grab her shoe and pull her down' [levitation]. And sometimes when we would be eating at the table, mother would fall asleep and we couldn’t wake her up' [ecstasy]."

"The investigators then realized that the children thought that these extraordinary experiences were normal since they saw them on a regular basis throughout their young lives.

"Eighteen years after her death, her body remained fresh and in a state of perfect preservation as if it had been just buried the day before. The following is her prophecy on the three days of darkness:

"'God will send two punishments: one will be in the form of wars, revolutions, and other evils; it shall originate on earth. The other will be sent from Heaven. There shall come over the whole earth an intense darkness lasting three days and three nights. Nothing can be seen, and the air will be laden with pestilence which will claim mainly, but not only, the enemies of religion. It will be impossible to use any man-made lighting during this darkness, except blessed candles.

"During these three days, people should remain in their homes, pray the Rosary, and beg God for mercy.

"All the enemies of the Church, whether known or unknown, will perish over the whole earth during that universal darkness, with the exception of a few whom God will soon convert. The air shall be infected by demons who will appear under all sorts of hideous forms.

"Religion shall be persecuted, and priests massacred. Churches shall be closed, but only for a short time. The Holy Father shall be obliged to leave Rome."

It is all left for discernment. They are certainly sensational predictions -- ones with which many would quibble. Are they realistic? That's for you to decide. After the darkness, said Blessed Taigi, Saints Peter and Paul would come down from Heaven, preach throughout the world, and designate a new pope. A great light would flash from them and settle on the right Cardinal.

Obviously, this was meant in the realm of spirits.

What we know for sure is that it is a matter of personal interpretation because mystics operate in two overlapping -- but often contradictory -- worlds, but the pulse is there: we live in an era in which many events will occur, some, perhaps, without precedent.