As we all know, at the Last Supper Christ established the Eucharist and did so by praying over the bread, in effect blessing and consecrating it. This was the beginning of Mass. Fascinating it is how the Eucharist reportedly was celebrated by the early Christian community at Jerusalem and by St. Paul on his visit to Troas. That's how far back it goes: nearly twenty-one centuries.

Although it is not to be compared to what Jesus did in the Upper Room, nor the consecration of a priest, we too can and should pray blessings upon food -- during grace at meals:

"Bless us, oh Lord, and these, Thy gifts, which we are about to receive, through Christ, Our Lord, amen," with the Sign of the Cross.

This should be done with real reverence.

It is a prayer of thanksgiving which carries protection and power and as for the blessing of the "gifts" themselves, it does us well to extend our prayers and meditate during grace on the Lord conferring His special powers of nourishment and healing on what we are about to eat, that it may sanctify us, that anything unhealthful in it might be neutralized, and that what is healthful be accented to provide our bodies with exactly what our bodies need (or miraculously insert anything that needs to be there in it).

Only Jesus -- only the Holy Spirit -- know exact what that is.

No doctor in the world has access to a fraction of what God knows about the intricacies of each body and its unique problems and needs. In the act of saying grace, in addition to the beautiful words of ritual, it does us well to pray the force of our hearts behind the blessing, united with God, that the food provide happiness, holiness, and longevity: in a way, spiritual vitamins.

Prayers count. Prayers and holiness can affect the physical.

When God moves, the unexplained is possible.

Years ago, a nun and biologist at Rosary Hill College in Buffalo did research indicating that when the hands of a healer were laid upon a laboratory flask, it caused the acceleration of an enzyme called trypsin (which in the body would lead to a healing effect!).

Although we must watch that such research not stray into the "new age" (plainly put, the occult), there's also research purporting to show that prayer, pleasant, holy words, and an agreeable environment affect the quality of water (which the Lord took to the ultimate, of course, when He transformed water into wine -- and which our priests take it to the ultimate when they transubstantiate water in the Precious Blood).

If in a different way, we can pray blessings over both what we eat and drink.

Does that really count? Can it really have a physical effect?

We have had previous accounts of how an expert in alternative medicine, Dr. Masaru Emoto, of Japan, says that for years he has photographed water crystals and finds that they react to prayer, music, and even the ambience created by words. There are certainly disputes over it. New Age? Fringe stuff? A combination?

Dr. Emoto claims to have seen astounding results: crystals that are beautifully formed when they have been in the presence of classical music -- or those praying -- and malformed or unformed structures when tension was expressed in the room or there were unkind words or heavy-metal music! One exposed to cathedral meditation music was gorgeous. "Crystals emerge for only twenty or thirty seconds as the temperature rises and the ice starts to melt," Dr. Emoto explained (in book called The Hidden Messages in Water). "This short window of time gives us a glimpse into a world that is indeed magical."

At left are two crystals, one from severely polluted water, the one next to it after the water was "blessed."

The researcher asserts that hundreds have replicated his experiments and that the spirit behind positive words -- and gratitude -- evoke the most beautiful crystals.

Meantime, unformed or misshapen crystals were noted when water was exposed to cell phones, television, certain computer screens, and microwaves, Emoto claims. Malformations were especially prominent in water that contained the toxic compound dioxin. The researcher asserts that even small amounts of  chlorine destroy the structures. Physical factors such as pollution affect the water dramatically.

That we can believe!

"The water of Tokyo was a disaster -- not a single complete crystal was formed," he writes (more images here). "However, within natural water, no matter where it came from -- natural springs, underground rivers, glaciers, and the upper reaches of rivers -- complete crystals formed."

"Learning about water is like an exploration to discover how the cosmos works, and the crystals revealed through water are like the portal of another dimension. The more you understand water, the more difficult you will find it to deny the existence of a God," says Emoto.

"I put fifty different types of water in fifty different Petri dishes I then freeze the dishes at minus-four Fahrenheit for three hours in a freezer. The result is that surface tensions forms drops of ice in the dishes about one millimeter across. The crystal appears when you shine a light on the crown of the drop of ice."

And therein came the alleged results.

Emoto -- who himself describes the experiments as seeming at first to be "off-the-wall" -- says that Beethoven's Pastoral Symphony resulted in "beautiful and well-formed crystals" and that the same was true of Mozart -- while rock jangled water as much as it jangles our nerves. 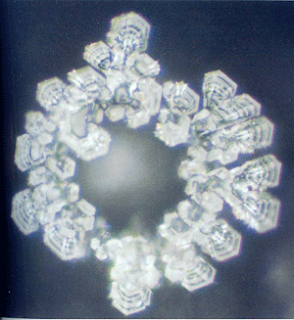 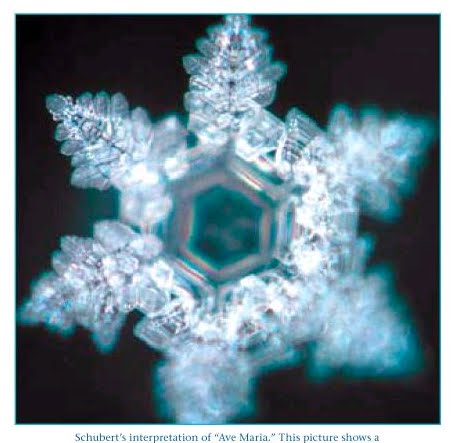 At the left is a crystal from water taken at Lourdes. At right is one that formed as Gospel music was played. These beautiful, well-formed crystals are in stark contrast to those placed in the presence of hard rock music or from municipal water systems such as that in Venice.

"Perhaps it is possible that the miracle water of Lourdes, France, which is said to have healing powers, is filled with the feelings of appreciation of the Mother Mary," he says. "As a result, people who have been made ill by the vibrations of hate can be miraculously healed by drinking this Holy Water."

At Lourdes, one must add, the healing is through the intercession of the Blessed Mother.

But we get the point: water from there is demonstrably extraordinary.

Is the same true of what we eat and drink after prayers at meals?

What might be seen in Holy Water; or, more dramatically: might there be the glimpse of eternity at some point during Consecration?

Does this research lend new insight into the Catholic dogma of transubstantiation (at a molecular level)?

Or is it all so far out as to belie serious discussion?

Again, for our discernment: The point is not to endorse the research, which indeed can be embraced by those of pagan-style spirituality; the point is that a prayerful, pleasant atmosphere is crucial to our health; the point is that Catholicism is based in Truth and its prayers are crucial at every supper. When people act out of their greed, they emit an energy that "serves to destroy the harmony within nature."

Meanwhile, saying thank you has the opposite effect. At left is exposure to "thank you" in Japanese. Gratitude resulted in the highest brilliance.

This Holy Week, take time to recite the Psalms at length and other prayers of thanksgiving before you eat.

Do it envisioning Jesus.

"Praise God, from whom all blessings flow; Praise Him all creatures here below; Praise Him above, ye heavenly Host; Praise Father, Son, and Holy  Ghost. All creatures that on earth do dwell Sing, to the Lord, with cheerful voice. Him serve with mirth, his praise forth tell Come ye before Him, and rejoice. The Lord ye know is God, indeed, Without our aid He did us make. We are His flock, He doth us feed, And, for His sheep He doth us take. Amen."